Chase away loneliness: 6 reasons to get a pet to your household 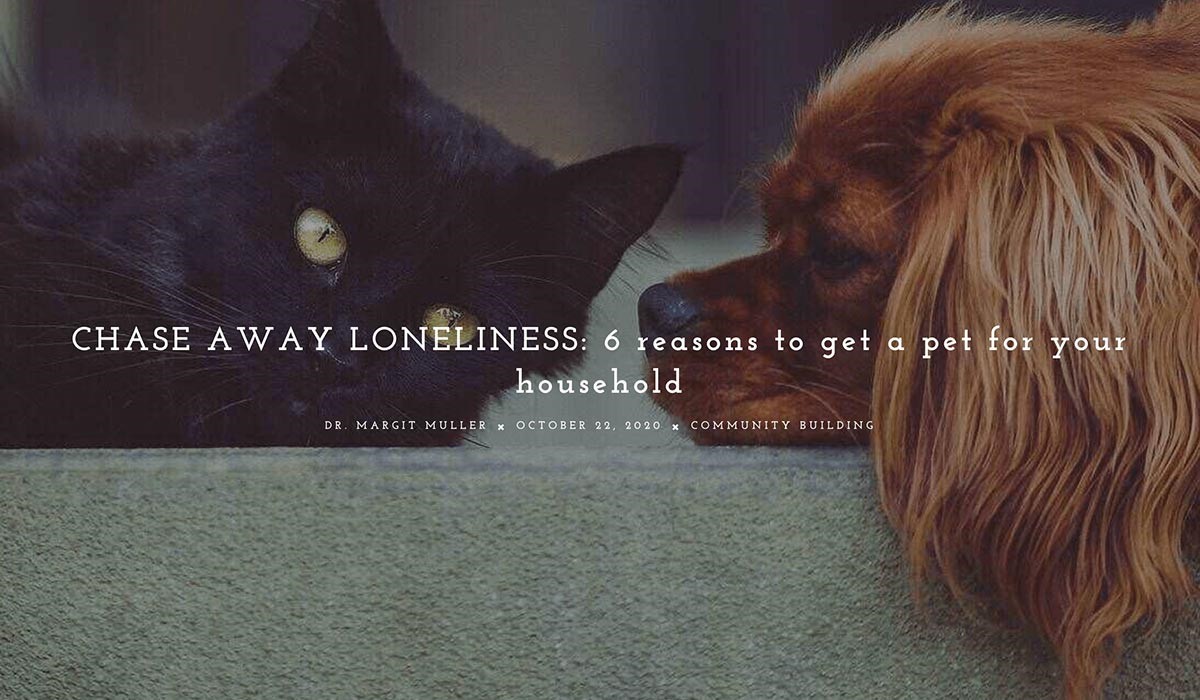 CHASE AWAY LONELINESS: 6 reasons to get a pet for your household

Due to an aging population and decreasing family bonds in many countries worldwide, loneliness has become a major issue in our modern world. Research has shown that loneliness leads to reduced physical health.

According to a 2018 Cigna Insurance survey of more than 20,000 U.S. adults, 46 percent of participants sometimes or always feel alone, 47 percent feel left out and 20 percent answered that they rarely or never feel close to people. Forty-three percent sometimes or always feel that their relationships aren’t meaningful, and a shockingly large number (18 percent) feel they have no one they can talk to.

So, what could be a solution to chase away your loneliness? Well, one thing many people have chosen to do is get a pet! If you’re not an experienced pet owner, you can read about the six major benefits of having an animal companion below.

A study by Mars Petcare and the Human Animal Bond Research Institute (HABRI) found that a whopping 89 percent of survey participants confirmed that getting a pet has helped them feel less lonely. In general, people with the closest bonds with their pets see the most significant positive impacts on their feelings of loneliness. In line with this, addressing loneliness was the most frequent reason that people would recommend pet ownership to others.

Pets can serve as confidants

Research on the bonds between people and their companion animals has revealed that 97 percent of pet owners talk to their pets. Pets fulfill our need to confide in or talk with someone we can trust. A great advantage that comes with talking to your pet is that—unlike when you’re speaking to people—you don’t need to worry about confidentiality, reprisals, judgments or meeting expectations.

Do you feel like your pet comforts you when you are sad? Then you are right! A University of Cambridge study found that pets do, indeed, comfort humans. Even in cases of personal loss and tragedy, a companion animal feels our sorrow and cuddles up to us in order to console us. There’s no better feeling than a wet dog’s nose, a cat’s purr or a horse’s soft blow in our face to give us a feeling of love, belonging and profound comfort.

Pets can be social “icebreakers”

According to the Institute of Medicine Division of Health Promotion and Disease Prevention (U.S.), social isolation is defined as a lack of social interaction with family, friends, neighbours and the larger society, and leads to major health risks. This is where the benefits of having pets come in.

Some 54 percent of respondents to the Mars Petcare and HABRI study said that their pet helps them connect with other people. A full 76 percent agreed that human-animal interactions can help address social isolation. If it’s diﬃcult for you to engage with other people, especially unfamiliar ones, pets can help break the ice and bring you into contact with others. Studies support the idea that people will risk directly engaging with unfamiliar people if a pet is present.

Additionally, having pets leads to more engagement throughout communities. This is especially true for dog owners, who interact with fellow dog owners and other people who are out and about while walking their dogs. You’ll never meet so many like-minded people as you do when you’re walking your dog! Science shows that pet owners are more likely to trust people when they’ve met and befriended them through their pets.

Pets may increase dopamine and endorphins

Do you want to be happy? Then you need more hormones! Dopamine has been nicknamed the “happy hormone,” as it’s responsible for our experience of happiness and for enhancing our pleasure. Similarly, endorphins are hormones that lead to euphoria and general well-being. After just five minutes with an animal, some people experience an increased output of both hormones.

This relates to the 2019-2020 National Pet Owners Survey by the American Pets Products Association, which found that a stunning 67 percent (84.9 million homes) of U.S. households own a pet. These research findings confirm the general assumption that owning pets increases our happiness, as our pets chase away our loneliness.

Dr. Margit Gabriele Muller is a Doctor of Veterinary Medicine, sought-after speaker and Certified Life Coach. Since 2001, Dr. Muller has been the Executive Director and Chief Veterinarian at the Abu Dhabi Falcon Hospital in the United Arab Emirates. She's a member of the Royal College of Veterinary Surgeons (UK), the Association of Avian Veterinarians (USA), and the Bavarian Chamber of Veterinarians (Germany). She lives in Abu Dhabi with her five dogs and several other pets.